Music is more than a certain sound or note. Sometimes it’s the spaces between notes that are the most impactful. But if you’re almost completely deaf, why even bother? For Robbie Wilde, it’s about the feeling and the groove. Known to many as “That Deaf DJ,” Wilde isn’t entirely deaf, though he lost most of his hearing at age seven due to ear infections and, unfortunately, a lack of health insurance. He learned to read lips; this HP commercial would have you believe he uses sign language, but he doesn’t. His love for the music he could hear, combined with his musical instruments skills, ultimately led him to the DJ decks.

Wilde is releasing his new EP Coda this summer and will be featured in the upcoming documentary Before We Were Kings, about the neurological effects of music. We caught up with Wilde about his audible journey to the booth.

When it comes to selecting music, it’s just feeling out the groove. 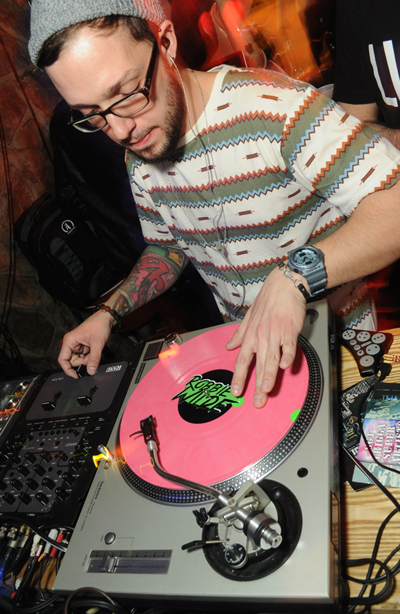 How did you learn to DJ?
I got introduced to DJing at 16 or 17 at parties, but I started myself when I was 18. I got to learn a lot of beat-matching and the basic essentials of it. When I turned 21, that’s where I really got into the turntables. My buddy had two broken Technics in the closet, and he handed them over and said, “Fix them and practice.”

What challenges have you faced because of your hearing impairment? Are there certain frequencies you can’t hear?
All of my right ear is completely gone. My left is mostly low frequencies, so more bass and mids. The highs hurt my ears a lot.

How does that affect your track selection?
When it comes to selecting music, it’s just feeling out the groove. It’s what tracks get me moving.

Do you have custom monitors?
Starkey made me a monitor; it’s an ear-mold monitor. That has just a 1/8” end for auxiliary. Hearing aid-wise, I have a Starkey as well. I’m sponsored by them, so they help me out with my left ear. It’s Starkey Hearing Foundation based out of Minnesota.

I don’t understand people; being too close to the speaker, it’s more noise than melodic.

A lot of people criticize DJs for using Serato to mix with their eyes, not ears. But obviously, that’s a necessity for you. How has technology helped your music and performance?
Serato for me was more to have an organized library. I don’t use the waveforms to beat-match or anything like that. I do use it as a guideline for me to at least have a hint at vocals on certain tracks. It’s difficult for me to distinguish sounds, so that helps me with cue points. I’ll set the cue points from the first hit, to where the vocal begins, to the bridges, and all that sort. So I have my own little system going on, color-coordinated. It’s a process from there for certain songs, from watching them on Lyrics.com or on YouTube, and just trying to connect them. And obviously, I have some friends that help me out, too.

Is the actual feeling from the bass a key factor in your mixing?
Yeah, 100 percent. We do have SubPac now [a backpack-like, portable subwoofer], who we work with. They supply bass. We have a sponsorship. We’re working with them in regards to having my own line. It’s something you put on your chair, but I also have a mobile one. It sends outs the low frequencies. When I do my work in the studio, that’s how I get the full experience of being at the club with a lot of music.

Numerous fans don’t protect their hearing at shows. What would you say to them about good hearing health?
Take care of your hearing. From what I have now, the remaining, it’s definitely a beautiful thing to have. You don’t want to lose that. It is very difficult to be involved in society and involve yourself with anybody. My advice is to honestly just stop being stupid. Put some tissue paper in there if you have to, but you definitely need to protect your ears. Plus, I don’t understand people; being too close to the speaker, it’s more noise than melodic. You have to stand a nice distance. Let the sound waves travel so you have more of a flow of the frequencies hitting you in a groovier way. Otherwise, it sounds like an offbeat key if you’re standing right next to the speaker. Being in that right area of the concert or club, it definitely takes the best experience. There’s a difference between noise and music.