Taking a trip with Infected Mushroom 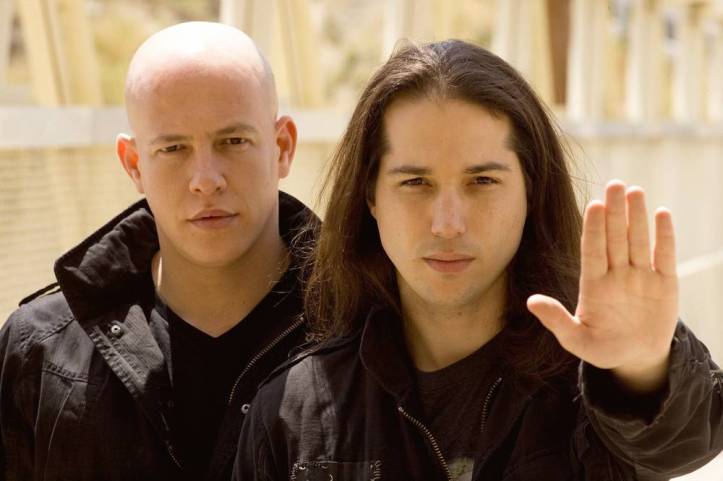 Would you call their sound psychedelic? Metal? Trance? A bit of all three? Trying to compartmentalize Infected Mushroom’s sound will only give you a headache. It’s best to simply experience it as music. You’ll get the chance to hear Amit “Duvdev” Duvedevani and Erez Eisen, aka Infected Mushroom, live this weekend… if you’re willing to drive a few hours to LA’s Electric Daisy Carninal. Dudev fills us in on everything from giant scary mushrooms to a new album inspired by the duo’s favorite restaurants.

Electronic music fans from around the country and Las Vegas are heading to Electric Daisy Carnival. How will it compare this year to years past?

Electric Daisy Carnival this year should be big. How many people? I really don’t know. Maybe 60,000-70,000 people. This year is a weird year in the economy stuff. A lot of people are not going out, but still. This is a big event with a massive lineup rave downtown at the Colosseum, so it should be great.

What about from Infected Mushroom specifically?

The new live set is completely different from what we’ve done in the past. It’s promoting the new album. It’s six new tracks in the live show and new versions of the old tracks and huge, inflatable mushrooms scaring people from the stage. It’s kind of a cool show.

People are telling me they’re a bit creepy because they have these teeth and red eyes.

Will guitarist Tom Cunningham and percussionist Rogério Jardim be joining you on stage?

Yeah, everybody’s going to be on stage—the guitarist, the drummer, a big set-up, big show.

How about guest vocalists joining you on stage, such as Jonathan Davis who sings on your new single “Smashing the Opponent”?

Well, Jonathan Davis was supposed to be there, but he’s touring with Korn at the moment in Europe. We really wanted to do the single live at EDC [Electric Daisy Carnival], but Korn is performing in Europe, so no.

You’re set to release the seventh album, Legend of the Black Shawarma on September 8. How would you describe it and what’s with the food theme?

This album, music-wise, is kind of a continuance to Vicious Delicious in the way that it, again, is a very diverse album and also very influenced by heavy metal in a little bit of a harder way. I think this album is less commercial than Vicious Delicious, a bit stronger. We’ve been working on it in the last two years in a brand new studio, so sound-wise, I think it’s the best work we’ve done yet… We did a lot of stuff that we’ve never done before, even involving our guitarists and percussionist in the recording. We never did that before, so it was cool working on the album.

The food concept came from when we began the album. One of the first tracks was called “Sa’eed,” which is a very special humus that we eat at in Israel. We’re both Israeli. Then we said, “You know what? Let’s call the tracks places that we consider temples of food.” So then came “Poquito Mas,” which is a very good Mexican chain in LA. Then came “Frank’s” which is the best tacos in Mexico in our opinion. But then came some other songs that kind of diverted from that concept, like “Killing Time.” So it’s kind of half food-based and half normal names.

In the past, you’ve been called “the only true mega-stars of psy-trance.” What do you think about all the labels and genres in dance music?

Oh, these labels—I never understood that. I consider myself in a band that does dance floor music. When I come to a rave or to a party or to a rock show, I want to see the people go out of their minds and dance as strong as possible. So, I’ve played even in rock festivals, which I have no place being there. But because my music is a little bit crossover with guitars and drums, they are bringing me there—and people dance. That’s what I do. I don’t care about which music it is or whatever. I just want to make people dance.