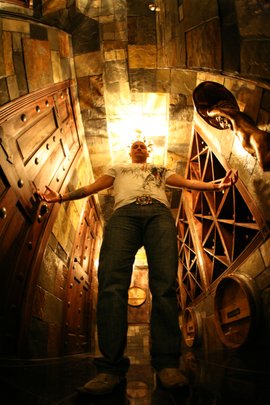 You just relocated from Chicago. Why Vegas?

For the first time in my 15 years of doing music … I think Las Vegas is really starting to accept underground music more. … My management company is also here, Calamity of Noise.

It’s changed … I used to tell people, “House music was put in my Cheerios growing up.” It’s on the radio. You come out here and not so much. You might get a “Day N’ Night” remix—which makes you want to throw up … You have some of the better clubs in Chicago right now coming here constantly and they see the mash-up format that’s making Vegas successful, but … they try and take that aspect back to Chicago and it killed the music scene there … I can find more work here than Chicago right now.

Speaking of people that are spoon-fed music, what should Vegas clubgoers know about you and why should they check you out?

One of the biggest reasons is I have a sound that I don’t believe any other DJ in this city has … You’re not going to get the same set every time with me … The biggest thing is I’m an artist and it’s like watching someone paint in my eyes, because I paint my sets. I don’t color by numbers or anything like that.

What’s the difference between “Svast” and your moniker “Auralfixation”?

The purpose of [Auralfixation] is a funny story. My last name, Svast, means “svastika.” So playing in some parts of Europe at my checkpoints, I would be hassled and I would have problems. So as a business decision, at that point, we decided to come up with he name Auralfixation … This was years ago, so now I think with people being educated on the computer maybe a little more they understand [a swastika] was a symbol of peace at one time.

Does the persona differ as well if you’re playing or producing under different names?

I’m a Gemini, so absolutely! … Who I am now as Svast is a different person, a growing person. Musically, there is a huge difference between the two, but it kind of depends on where I am in my life. But I put the past away in my life and I’ve never looked back.

We’re not going invent a new mp3 player or something like that [laughing]. What we want people to do is perceive a different sound and … reaching this whole genre of people that know nothing about our music. We don’t want the drug culture the only ones enamored in our music. We know, unfortunately, it’s a big part of our music, but that’s not what we want.

Can we get past the stereotype people put on dance music and culture?

I don’t think you’ll ever break the stereotype. Just like not all hip-hop is gangster, but it’s a stereotype … A friend of mine and I from LA [were] just having a conversation: “What if Beethoven lived today with the tools that we have now? How amazing would that be?”

I really think it’s reaching a crowd a younger crowd, a more intelligent crowd than the generation of people who don’t understand it … I grew up in the old Crowbar Chicago where you took five or ten pills a night and you just lost your mind … I can’t tell people enough—and this is very personal—life is the best high that you can ever have or ever get, and I didn’t realize that for so many years.

So no drinking or anything now?

I have a drink every once in a while. I can’t kick the cigarette habit. I love fucking smoking [laughing] … I have a $70 box of mint Nicorette in my car and two packs of cigarettes next to it. My doctor said, “It’s ok, Thom. One thing at a time. Your mind will freak out if you don’t have your cigarettes.”

Something that is very important that’d I’d like to point out is I am starting a not for profit organization called M.O.M.: Musicians Opposed to Methamphetamines. I’ve been blessed with the gift of life and I want to use that, and I think that’s one reason why I came back – to help people. Meth is an epidemic in this city … Our attempt is to try and get a Prometa Clinic here in Vegas … I want to start having parties at these clubs where they’ll allow me to donate portions of the door, portions of the bar to M.O.M.

There are a lot of good people out here, amazing people. Some of the best people I know are caught up. They don’t have anyone to support them or help them through. And addicts lose everything in their life. I lost everything. I lost my fiancé, I lost my home, I lost my cars, I lost my life, literally. I’m very fortunate to be here talking to you, and that’s why I think I can help people and this is the best city for it … People die for causes. Why not live for one?

(Originally published in Las Vegas Weekly and at LasVegasWeekly.com.)